​Several great craft breweries are located in the Conway, NH area and Mt. Washington Valley.  Beer lovers will find a variety of IPAs, stouts, lagers, and other beer styles to enjoy.

Some local breweries include Tuckerman Brewing Company, Moat Mountain Smoke House & Brewing Co., Sea Dog Brewing Company, Ledges Brewery, and Saco River Brewery. Each brewery has its own unique beer offerings, so there is something for everyone to enjoy.

If you're looking for a great place to hear live music and drink beer, then you'll want to check out Tuckerman Brewing Company. They often have live music on Friday, Saturday, and Sunday afternoons. Ledges Brewery in Intervale, NH usually has local live bands playing Friday and Saturday nights. Let's not forget the Saco River Brewery in Fryeburg, Maine, they also have live music outside or in the brewery. Always check the brewery websites for brewery hours and music schedules. 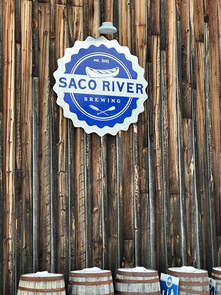 ​If you're a beer drinker, chances are you have a preferred style. And when it comes to IPAs, there are two camps: those who prefer the bitterness of a West Coast IPA and those who prefer the juiciness of a New England IPA. But what's the difference between the two, and why do people have such strong opinions about them? Let's take a closer look.

West Coast IPAs are typically lighter in color and more clear than their New England counterparts. They also have a more distinct hop flavor and aroma, thanks to the use of Cascade and Chinook hops. West Coast IPAs tend to be more balanced, with a moderate bitterness that doesn't overpower the malt.

New England IPAs, on the other hand, are hazy and opaque in color. They also tend to be much fruitier in flavor and aroma due to the use of hops like Citra, Mosaic, and Amarillo. And since they're unfiltered, they can have a slightly sweet taste. As for bitterness, New England IPAs usually don't pack as much of a punch as their West Coast cousins.

So, which is better? It all comes down to personal preference. If you're looking for a beer that's easy to drink and not too bitter, go for a West Coast IPA. But if you're in the mood for something fruity and juicy, go for a New England IPA. Either way, you can't go wrong.

Conclusion:
At the end of the day, it all comes down to personal preference. Do you prefer your beer to be light and refreshing or hazy and juicy? There's an IPA to please your palate, whichever camp you find yourself in. So grab your favorite beer lover (we're sure they won't mind) and settle in for a night of argument—or discussion—about which style is better. Cheers!